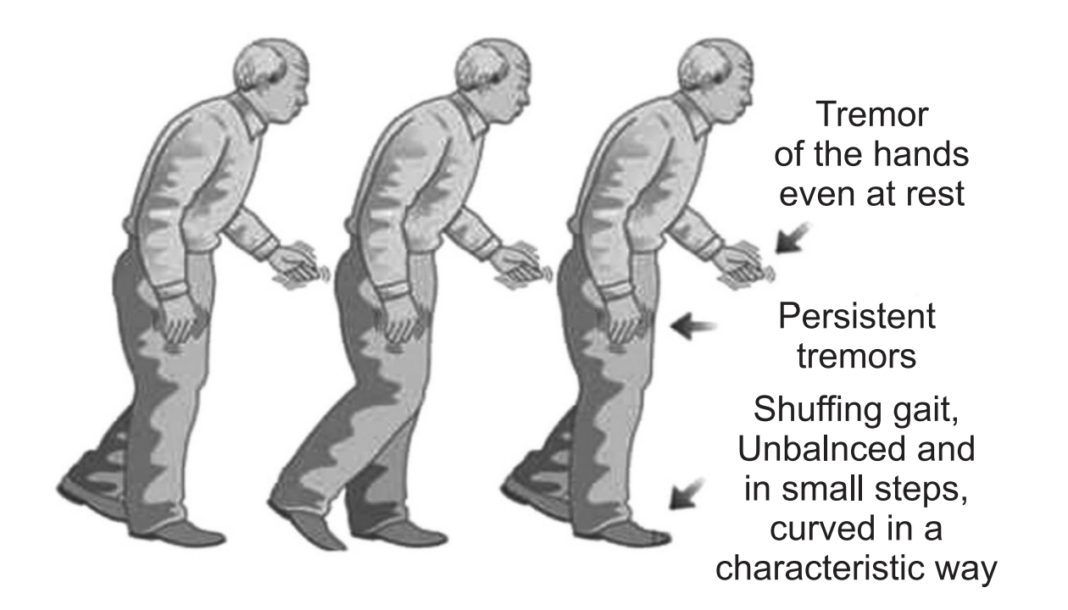 The immediate cause of PD is degeneration of brain cells in the area known as the substantia nigra, one of the movement control centers of the brain. Damage to this area leads to the cluster of symptoms known as “Parkinsonism”. The substantia nigra is one of the principal movement control centers in the brain. By releasing the neurotransmitter
known as dopamine, it helps to refine movement patterns throughout body. The
dopamine released by nerve cells of substantia nigra stimulates another brain region, the corpus striatum. Without enough dopamine, the corpus striatum cannot
control its targets, and so on down the line.

Ultimately, the movement patterns of walking, writing, reaching for objects, and other basic programs cannot operate properly and the symptoms of parkinsonism are the result. The cause of parkinson’s disease is unknown, but several factors appear to play a role, including:

Genetic: Researchers have identified specific genetic mutations such as α–synuclein and parkin, that can cause Parkinson’s disease, but these are uncommon except in rare cases with many family members affected by Parkinson’s disease. Recent studies suggest that
dysfunction of the ubiquitin–proteasome system (UPS) and the resultant accumulation of misfolded proteins and endoplasmic reticulum stress may cause the death of
Dopaminergic (DA) neurons. In parkinson’s disease, degenerating brain cells contain Lewy bodies, which help to identify the disease.

A synuclein is found within Lewy bodies: Although many substances are found within Lewy bodies, scientists believe the most important of these is the natural and widespread protein called α-synuclein. It is found in all Lewy bodies in a clumped form that cells cannot break down. This is currently an important focus among Parkinson’s disease researchers. The cell death leading to Parkinsonism may be caused by a number of conditions, including infection, trauma and poisoning. Some drugs given for psychosis, such as haloperidol or chlorpromazine, may cause parkinsonism. When no cause for nigral cell degeneration can be found, the disorder is called idiopathic Parkinsonism. Parkinsonism may be seen in other degenerative conditions, known as the “Parkinsonism plus” syndromes, such as progressive supranuclear palsy. There are some known toxins that can cause parkinsonism, most notoriously a chemical called MPTP, (1-methyl-4-phenyl 1,2,3,6-tetrahydropyridine) is a neurotoxin precursor to MPP+ , which causes permanent symptoms of Parkinson’s disease by destroying dopaminergic neurons in the substantia nigra of the brain, found as an impurity in some illegal drugs. Parkinsonian symptoms appear within hours of ingestion
and are permanent. MPTP may exert its effects through generation of toxic molecular fragments called free radicals, and reducing free radicals has been a target of
several experimental treatments for parkinson’s disease using antioxidants. It is possible that early exposure to some unidentified environmental toxin or virus leads to undetected nigral cell death, and manifests as normal age related decline brings the number of functioning nigral cells below the threshold, needed for normal movement. It is also possible that, for genetic reasons, some people are simply born with fewer cells in their substantia nigra than others, they develop parkinson’s disease as a consequence of normal decline.

Age: Young adults rarely experience Parkinson’s disease. It ordinarily begins in middle or late life, and the risk increases with age. People usually develop the disease around age 60 or older.

Sex: Men are more likely to develop Parkinson’s disease than are women.

Exposure to toxins: Ongoing exposure to herbicides and pesticides may slightly increase risk of Parkinson’s disease.

The loss of dopamine neurons occurs most prominently in the ventral lateral substantia nigra. Approximately 60-80% of dopaminergic neurons are lost before the motor signs of parkinson’s disease emerge. Some individuals who were thought to be normal neurologically at the time of their deaths are found to have Lewy bodies on autopsy examination. These incidental Lewy bodies have been hypothesized to represent the presymptomatic phase of Parkinson disease. The prevalence of incidental Lewy bodies increases with age. Nonetheless, they are a characteristic pathology finding of Parkinson disease.