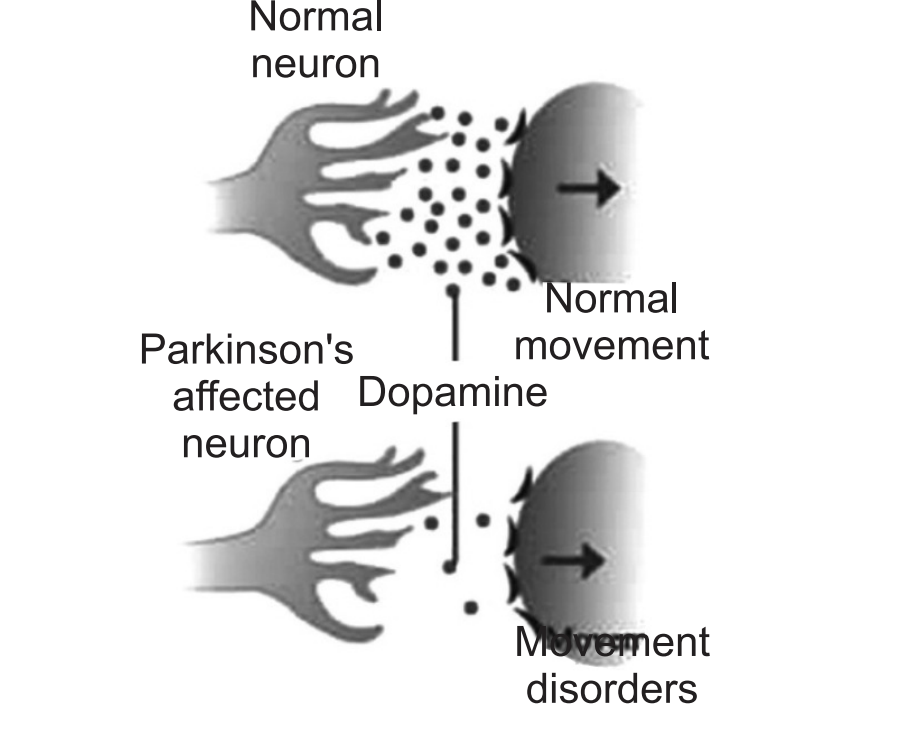 Parkinson disease | What is Parkinson’s disease ?

Dopamine allows smooth, coordinated function of the body’s muscles and movement. When
approximately 70% of the dopamine producing cells is damaged, the symptoms of Parkinson disease appear. Parkinson disease (PD) is recognized as one of the most common neurologic disorders, affecting approximately 1% of individuals older than 60 years. It is a progressive movement disorder marked by tremors, rigidity, slow movement (bradykinesia), and posture instability.

The motor symptoms of parkinson’s disease result from the death of dopamine generating cells in the substantia nigra, a region of the midbrain; the cause of this cell death is unknown. Sometimes it is genetic, but most cases do not seem to run in families. Exposure to chemicals in the environment might play a role. It usually begin in a person’s late fifties
or early sixties. Parkinson disease causes progressive decline in movement controls,
affecting the ability to control initiation, speed and smoothness of motion. Symptoms of parkinson’s disease are seen in 15% of the people in the age 65-74 and almost 30% of people in age 75-84.Most cases of parkinson’s disease are sporadic. In that, there is a spontaneous and permanent change in nucleotide sequences. Sporadic mutations also involve unknown environmental factors in combination with genetic defects. The abnormal gene (mutated gene) will form an altered end product or protein. This will cause
abnormalities in specific areas in the body where the protein is used. Some evidence suggests that the disease is transmitted by autosomal dominant inheritance. This implies that an affected parent has a 50% chance of transmitting the disease to any
child. 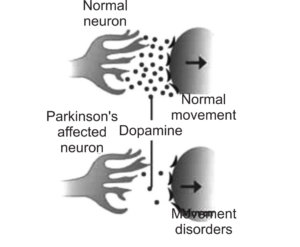 This type of inheritance is not commonly observed. The most recent evidence is linking parkinson’s disease with a gene that codes for a protein called α-synuclein.

What are the Symptoms of Parkinson’s Disease

Parkinson’s disease symptoms and signs may vary from person to person. Early signs
may be mild and may go unnoticed. Symptoms often begin on one side of body and usually remain worse on that side, even after symptoms begin to affect both sides.Parkinson’s signs and symptoms may include:

Tremors: Usually begins in a limb, often hand or fingers. The classic tremor of parkinson’s disease is called as “Pill-rolling tremor”, because the movement resembles rolling a pill between the thumb and fore finger. This tremor occurs at a frequency of
about three per second.

Slowed movement (Bradykinesia): It may involve slowing down or stopping in the middle of familiar tasks such as walking, eating or shaving, this may include freezing in place during movements (akinesia).

Impaired posture and balance: Postural instability or balance difficulty occurs. This may lead to a rapid, shuffling gait (festination) to prevent falling.

Loss of automatic movements: In Parkinson’s disease, ability to performn unconscious movements, including blinking, smiling or swinging arms when walking may decrease. In most cases, there is a “masked face”, with little facial expression and decreased eye blinking.

Speech changes: Speech may be more of a monotone rather than with the usual inflections. Patient may speak softly, quickly, slur or hesitate before talking.

Writing changes: Handwriting changes, with letters becoming smaller across the page (micrographia) and become difficult. Progressive problems with intellectual
function (dementia). Bladder problems: Parkinson’s disease may cause bladder problems, including being unable to control urine or having
difficulty urinating.

Constipation: Many people with Parkinson’s disease develop constipation, mainly due to a slower digestive tract.

Smell dysfunction: Problems with sense of smell, may have difficulty identifying
certain odours or the difference between odours.

Fatigue: Many people with Parkinson’s disease lose energy and experience fatigue, and the cause is not always known.

Pain: Many people with Parkinson’s disease experience pain, either in specific areas of their bodies or throughout their bodies.

Sexual dysfunction: Some people with Parkinson’s disease notice a decrease in sexual desire or performance. In addition, a wide range of other symptoms may often be seen

Some beginning earlier than others: Depression, problems with sleep, including restlessness and nightmares. Emotional changes including fear, irritability and insecurity.