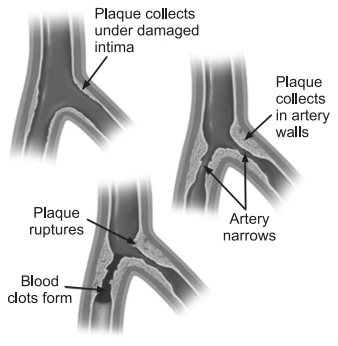 Arteriosclerosis vs Atherosclerosis | Definition with Meaning and Difference & Comparison

Arteriosclerosis can occur when arteries grow thick and stiff and restrict blood flow
to organs and tissues in the body. This gradual process, also known as hardening of
the arteries, weakens arteries and can develop in various organs, most commonly
the heart. Arteries circulate blood throughout the body, but when plaque, fat, cholesterol and other cellular waste deposite on artery walls, arteriosclerosis can develop. Arteriosclerosis can develop into atherosclerosis. This condition can cause heart disease, strokes, circulation problems in the arms and legs, aneurysms that can cause life-threatening internal bleeding and chronic renal failure.

Atherosclerosis (or arteriosclerotic vascular disease) is a condition where the arteries become narrowed and hardened due to an excessive buildup of plaque around the artery wall. Plaque is made up of fat, cholesterol, calcium, and other substances found in the blood. Over time, plaque hardens and narrows arteries. The disease disrupts the flow of blood around the body, posing serious cardiovascular complications. Atherosclerosis can lead to serious problems, including heart attack, stroke, or even death. Healthy arteries are flexible and elastic, but over time, the walls in arteries can harden, a condition commonly called hardening of the arteries.

The lesions begin as the intima (innermost layer of blood vessel wall) of the arterial wall start to fill up with the deposition of cellular wastes. As these start to mature, they can take different forms of arteriosclerosis. All are linked through common features such as the stiffening of arterial vessels, thickening of arterial walls and degenerative nature of the disease.

A sub classification of arteriolosclerosis is the fibromuscular intimal thickening. There is typically hyalinosis or deposition of hyaline protein in these lesions as well. This includes the categories like:-

Endocrine System What Is It ? & Its Functions With Labelled Diagram