Graves’ disease Definition | What Is It? | Symptoms & Treatment 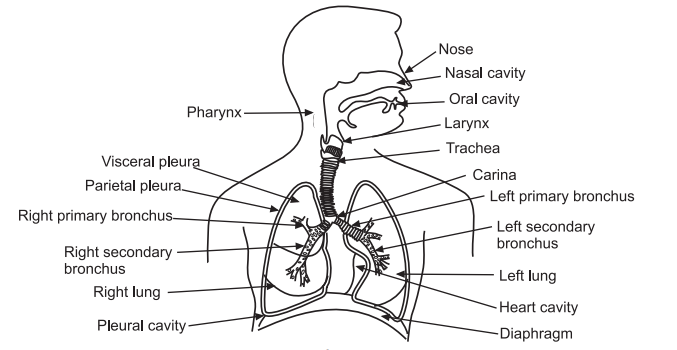 The cells of the human body require a constant stream of oxygen to stay alive. The
respiratory system provides oxygen to the body’s cells while removing carbon dioxide, a
waste product that can be lethal if allowed to accumulate. There are 3 major parts of the
respiratory system: the airway, the lungs, and the muscles of respiration. The airway, which includes the nose, mouth, pharynx, larynx, trachea, bronchi, and bronchioles, carries air between the lungs and the body’s exterior. The lungs act as the functional units of the respiratory system by passing oxygen into the body and carbon dioxide out of the body. Finally, the muscles of respiration, including the diaphragm and intercostal muscles, work together to act as a pump, pushing air into and out of the lungs during breathing.

Pharynx: The pharynx, also known as the throat, is a muscular funnel that extends from the posterior end of the nasal cavity to the superior end of the esophagus and larynx. The pharynx is divided into 3 regions: the nasopharynx, oropharynx, and laryngopharynx. The nasopharynx is the superior region of the pharynx found in the posterior of the nasal cavity. Inhaled air from the nasal cavity passes into the nasopharynx and descends through the oropharynx, located in the posterior of the oral cavity. Air inhaled through the oral cavity enters the pharynx at the oropharynx. The inhaled air then descends into the laryngopharynx, where it is diverted into the opening of the larynx by the epiglottis. The epiglottis is a flap of elastic cartilage that acts as a switch between the trachea and the esophagus. Because the pharynx is also used to swallow food, the epiglottis ensures that air passes into the trachea by covering the opening to the esophagus. During the process of swallowing, the epiglottis moves to cover the trachea to ensure that food enters the esophagus and to prevent choking.

Trachea: The trachea connects the larynx to the bronchi and allows air to pass
through the neck and into the thorax. The rings of cartilage making up the trachea
allow it to remain open to air at all times. The open end of the cartilage rings faces posteriorly toward the esophagus, allowing the esophagus to expand into the space
occupied by the trachea to accommodate masses of food moving through the
esophagus.

The main function of the trachea is to provide a clear airway for air to enter and exit the lungs. In addition, the epithelium lining the trachea produces mucus that traps dust and other contaminants and prevents it from reaching the lungs. Cilia on the surface of the epithelial cells move the mucus superiorly toward the pharynx where it can be swallowed and digested in the gastrointestinal tract.

Lungs: The lungs are a pair of large, spongy organs found in the thorax, lateral to the heart and superior to the diaphragm. Each lung is surrounded by a pleural membrane that provides the lung with space to expand as well as a negative pressure space relative to the body’s exterior. The negative pressure allows the lungs to passively fill with air as they relax. The left and right lungs are slightly different in size and shape due to the heart pointing to the left side of the body. The left lung is therefore slightly smaller than the right lung. The interior of the lungs is made up of spongy tissues containing many capillaries and around 30 million tiny sacs known as alveoli. The alveoli are cup-shaped structures found at the end of the terminal bronchioles and surrounded by capillaries. The alveoli are lined with thin simple squamous epithelium that allows air entering the alveoli to exchange its gases with the blood passing through the capillaries.

Graves’ disease Definition | What Is It? | Symptoms & Treatment